“Sewerville: The Lay of the Land,” is now available on Amazon.com, just in time for all of you lucky kids that received a Kindle or tablet computer for Christmas. (I’d imagine that it will also eventually end up published in traditional formats down the road as part of Sewerville Part II: Tales from the Sewer.) 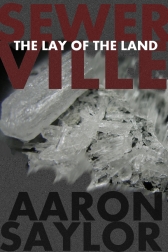 This short piece sets up the smalltown world of Sewardville, KY in true smalltown fashion, with some funny/sad anecdotes that shed light on how the town came to be known hither and yon as Sewerville. The meaning behind the novel Sewerville‘s title is clear enough I think, given all the seedy sorts of goings-on, but now you have “The Lay of the Land” for a little extra background color. There are some shoutouts to prominent characters like Boone and Walt Slone, and also some mention of “the Mountain;” as some of you may know, The Mountain was the book’s working title, as in Where you from? I’m from the Mountain.

“The Lay of the Land” was actually written as the first chapter of Sewerville, but fell on the chopping block because I wanted to get right on with the story’s oh-so-important family dynamics. Still, I thought there was a little bonus fun to be had for folks who’ve liked the novel, and this was another way of saying “Thanks!” to all of you.

This bonus section is free through January 1. After that it’s only $0.99, but why pay for something later, when you can get it now for nothing?

As reported elsewhere on the Internets: there was another war on Christmas but it looks like Christmas survived. I guess that means Fox News won themselves a medal.